Day 7, A conversation between two paintings 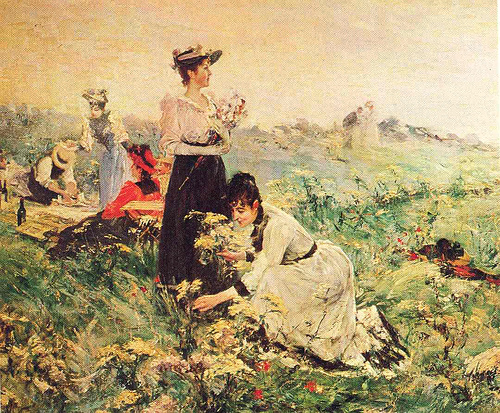 Picnic in Normandy by Juan Luna

My students are always fascinated when I point out that Juan Luna’s Spoliarium isn’t his only work, nor academic painting his only style. Two examples currently hang in the Vargas Museum, right inside campus. One is a study of The Trial of Galileo and the other is Picnic in Normandy. If these two painting could talk, I wonder how the conversation would actually go.

The first to greet you is the Trial, “There is no question to my greatness. I represent academic work, the style accepted by the famed Salons. I demand the highest of skill to produce. It is by this measure that an artist can truly be accepted as a great artist.”

But the Picnic would soon respond, “I challenged the norm of the Salon. This is the beginning of impressionism and modern art. There is no need to be restricted by the Salon. Impressionists would soon have the Salon the Refusés to respond to such restrictions. I am freedom.”

It is as the art world was in the 19th century. There is the highly established academic style of painting, the only way then to be truly accepted into the Salons, the epitome of an artist’s career. On the other hand, the time also signals change. A change in art, a change in perspective.

The Trial would tell of the technique, “Look at the beauty of my composition, the balance.  Look at the fineness of the strokes. The contrast in darkness and light. The story centres of Galileo and look at how the spotlight seems to hit him, while his critics are cast in darkness. Only a greatly skilled artist would be able to represent this story like this.”

But Picnic would gently smile and say, “Look at how light I am. Look at the brightness of this canvas. Look at the brushstrokes, rough and alive, each of them as if telling their own stories. Skills for the academia are inside the studio, but for us, it is right here in the sun. Looking at me, you can feel the wind in your hair and the sun in your skin. It is as if light has been captured in this particular moment in time.”

The usage of light would be a key difference in the two styles. The academic style needed to perfect the usage of light inside the stability of the studios, while the impressionists would really go outside to try and capture how light affects the objects. Monet’s Rouen Cathedral series and Water Lilies depict this perfectly.

The Trial would point out, “There is a lot to learn in works like me. I bring to life important historical moments. Here, you can picture the story and the trial of Galileo. The man to bravely say that the earth is not the centre of the universe, and the earth actually revolves around the sun. This was against the teaching of the church at the time and would cost Galileo his life.”

But Picnic would reply, “Do you say that there is nothing to learn in everyday life? I put that into focus. I am lightness, and air, and freedom. Though history is important, it is everyday life that we actually live in. Painting how our life is, gives it more life. It gives us time and opportunity to reflect at the ephemeral moment that we live in. Everyday life is just as important.”

Which is more important indeed? History or everyday life? Must there be a conflict? In the academic style, historical and allegorical paintings are certainly given more weight. It is the way to acceptance. But the vantage point of everyday life must not be forgotten. The 19th century would weigh this two together, with two opposing sides. One has an established footing, while the other is starting to flourish.

The Trial may perhaps conclude and say, “There is a freedom to you, but I am the path to acceptance, the path that Juan Luna needed to take to establish himself. Thru his academic works, we was able to say that I am just as good as the colonisers.”

While Picnic would accept, “You are the path to acceptance. But indeed I am the path to freedom. I am the proof that he lived through this time, that he accepted the challenge of creating. He learned and he continued to learn.”

The 19th century was a signal for change. The academic style was challenged by the impressionists. In the Philippines, it was the beginning of an active engagement of the artists such as Luna in Europe. Their social class and status gave them a drive to prove themselves equal to the colonisers. It is the time that Jose Rizal would be motivated to write the two great Filipino novels, Noli Me Tangere and El Filibusterismo. Their first drive is to prove themselves equal, it would be later that the call for revolution would be engaged.

Note: I wish I am more fluid with my words, but I enjoyed this assignment. Contrasting two different objects in a form of a dialogue is not easy. This two works entered my mind and I just let it go. I hope to improve on my prose, as it feels like the paintings are giving a lecture. Also, I wish I can show you The Trial of Galileo but I can’t seem to find an image online. I can only show Picnic in Normandy.

2 comments on “Day 7, A conversation between two paintings”